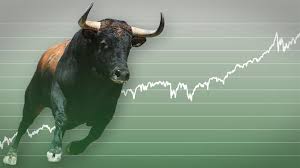 Indian equity benchmarks ended higher with gains of over half percent on Thursday, on the back of consistent buying support in index heavyweights — Reliance Industries, ITC and Infosys. Market opened on a weak note amid mixed global cues. Some concern also came with report indicating that foreign institutional investors (FIIs) have been on a selling spree in India this financial year, with November seeing an outflow of over Rs 17,900 crore in the equity cash market, taking the net outflow in the segment since April to almost Rs 87,000 crore.

During the afternoon session, market recovered and gained momentum to enter into green terrain, as traders turned optimistic with a private report stating that Official data print on the GDP will show a 7.8 per cent expansion on a year-on-year basis for the September 2021 quarter.

Meanwhile, in order to mitigate the financial deepening challenges being faced in the country, Niti Aayog has proposed setting up of full-stack ‘digital banks’ or DBs, which would principally rely on the Internet and other proximate channels to offer their services and not physical branches.

The Niti Aayog, in a discussion paper titled ‘Digital Banks: A Proposal for Licensing & Regulatory Regime for India’, makes a case and offers a template and roadmap for a digital bank licensing and regulatory regime for the country. It said digital banks are banks as defined in the Banking Regulation Act, 1949 (BR Act).

Besides, it mentioned ‘In other words, these entities will issue deposits, make loans and offer the full suite of services that the Banking Regulation Act empowers them to. As the name suggests, however, DBs will principally rely on the Internet and other proximate channels to offer their services.’

Technically, the important key resistances are placed in Nifty future are at 17676 levels, which could offer for the market on the higher side. Sustainability above this zone would signal opens the door for a directional up move with immediate resistances seen at 17707 – 17737 levels. Immediate support is placed at 17474 – 17303 levels.