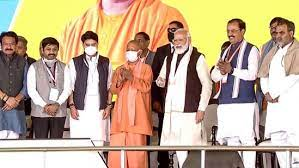 (G.N.S) Dt. 25
Jewar/Lucknow
The foundation stone for the Noida International Airport laid by Prime Minister Narendra Modi at Jewar in Uttar Pradesh, With this, the state will become the only state in India to have five international airports.
Prime Minister Narendra Modi said: “The Noida International Airport will be a logistical gateway. With the speed at which the aviation sector is rising, this airport will play a major role in the sector…there will be dedicated space (40 acres) for repair, maintenance and overhaul MRO services. Nearly 15,000 crores is spent on maintenance and the revenue is gained by other countries. This airport will change that.”
“When air connectivity improves, tourism flourishes. Whether it is Mata Vaishno Devi or Kedarnath, the number of tourists increased after helicopter ride services started. This airport will be crucial for those visiting for pilgrimage in West UP,” PM Modi added.
“Some political parties in our country have always put their self-interest first. They think only about themselves and the development of their own family. We follow the spirit of the nation first,” Prime Minister Modi said.
The Noida International Airport at Airport is spread across an area of 5,000 acres and is being developed by Zurich International Airport AG at an estimated cost of Rs 29,560 crore.