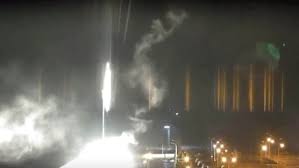 Media could not verify the battlefield report, and there was no immediate response from Kyiv to the allegation.

Russia and Ukraine have traded blame for shelling near the plant, which on Thursday sparked fires in the ash pits of a nearby coal power station that disconnected the plant from the power grid.