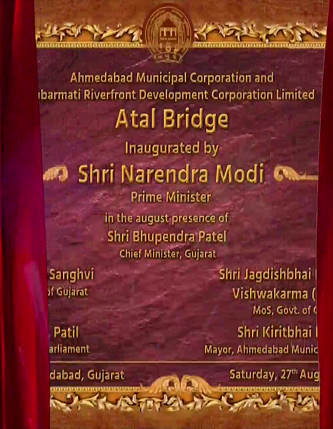 Prime Minister Narendra Modi will began his two-day visit to poll-bound Gujarat by addressing ‘Khadi Utsav’ at the Sabarmati riverfront in Ahmedabad city. Khadi Utsav is a one-of-its-kind event being organized as part of the Center’s “Azadi Ka Amrit Mahotsav” to highlight the importance of khadi in India’s freedom struggle.

The event also feature an exhibition showcasing the “evolution of charkhas” by displaying 22 charkhas from different generations used since 1920s. About 7,500 women khadi artisans from various districts of Gujarat spinning charkha (spinning wheel) live at the same time and at the same place.

From the same venue, the prime minister inaugurated the foot over bridge (Atal Bridge).

“This bridge will provide connectivity to Multi Level Car Parking and various public development on East and West Bank from plaza between Flower Park and Event Ground at West Bank to proposed Art / Cultural / Exhibition Centre on East Bank,” a statement said.

The bridge which is unique in its design – both technically and visually – will also augment the status of the Riverfront as well as of the city and will become an engineering marvel.

The pedestrian-only ‘Atal Bridge’ is a foot-over bridge (FOB) on the Sabarmati river, constructed between Ellis Bridge and Sardar Bridge.

This iconic bridge, with an eye-catching design and LED lighting, is nearly 300 meters long and 14 meters wide in the middle.

The bridge has been built using 2,600 metric tones of steel pipes.