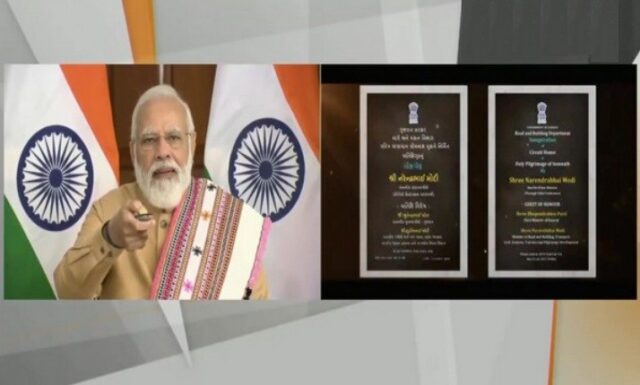 The 48-room four-storeyed building of the new circuit house built on an area of 15,000 square metre with parking facility is aimed to provide accommodation facilities to pilgrims coming from across the nation.

“The need of a circuit house was felt as there was only one guest house which is also far from the temple. So, to accommodate people, the temple trust was always under pressure,” he said.

“But after this circuit house, which is not far away from the temple, the trust will not be pressurised and they will devote more time and attention to the temple. People from their rooms while staying at this circuit house will witness the sea waves and the temple too. With added facilities in Diu, Dwarka, Bet Dwarka, Somnath will be a centre point for the tourist circuit” PM Modi added.

“From different states and corners of the world every year one crore pilgrims come to the Somnath Temple. When they return, they take along new experiences, beliefs and thoughts with them. Thus, the way the travel is important, equally important is the experience. Today, there are good roads, transport facilities and staying facilities for the pilgrims here, tourist facilitation centre, waste management for cleanliness. A pilgrim plaza and complex proposal for the Somnath Temple is in its final stages. Similar kinds of facilities are being proposed for the Ambaji Temple also,” Modi added.
“Also, a special train from Delhi to Kashi will start tomorrow (Saturday),” the PM declared.