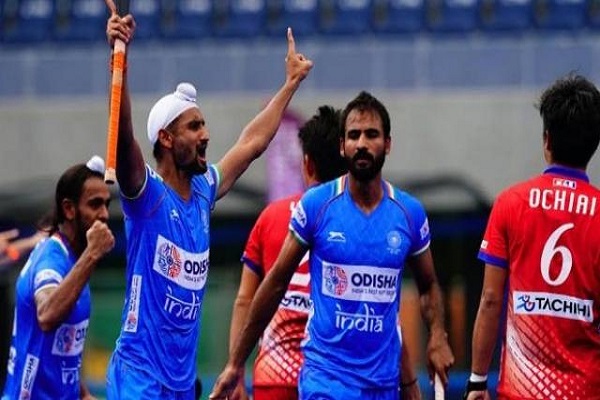 (G.N.S) Dt.20
Tokyo
striker Mandeep Singh’s hat-trick helped the Indian hockey team beat Japan by 6.3 to make it to the final of the Olympic Test tournament. India was beaten by New Zealand 2.1 in the third match. Now on Wednesday, the Indian team will face New Zealand in the final. Mandeep scored in the ninth, 29th and 30th minute, while Neelakanta Sharma scored the third, Neelam Sanjip Sess in the seventh and Gurjant Singh in the 41st minute.
For Japan, Kantaro Fukuda (25th), Kenta Tanaka (36th) and Kazuma Murata (52nd) scored goals. Nilakanta scored a field goal in the third minute, giving India a great start. After taking an early lead, the confident Indian team kept the pressure on the Japanese defense. Neelam doubled as India converted a penalty corner in the seventh minute. India continued their aggressive play and Mandeep scored the team’s third goal in the ninth minute. Japan scored a penalty corner in a counter-attack in the last minutes of the first quarter but could not score. Jarmanpreet Singh’s shot went out of the post in the second quarter.
Captain Harmanpreet Singh’s precise shot was saved by Japanese goalkeeper Takashi Yoshikawa. The first goal for Japan was scored by Fukuda in the 25th minute. After this, however, Mandeep increased India’s lead to 5.1 with two consecutive goals. Japan started the offensive in the third quarter. Tanaka scored a field goal in the 36th minute. Gurjant scored the sixth goal in the 41st minute for India. Murata scored the third goal for Japan eight minutes before Hooters. India reached the second place in the table with this win while New Zealand are on top.