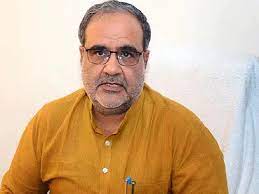 In a tweet, Chaudhary said, “Resigned from the cabinet today for the due discharge of the responsibility of the state president of BJP.” Chaudhary had arrived here from Delhi in a Shatabdi train on Monday, first time after his appointment as the BJP’s state chief, and was accompanied by Union minister Sanjiv Balyan, former Union minister Mahesh Sharma, and several party MPs and MLAs.

After tendering his resignation as the minister, Chaudhary claimed that the BJP will register a massive victory in the urban body elections and the Lok Sabha seats in the state.