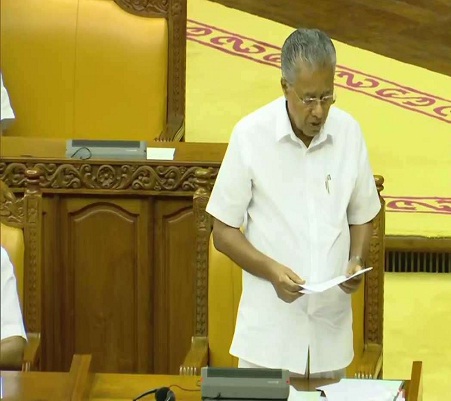 (G.N.S) Dt. 31
Thiruvananthapuram
The Kerala Legislative Assembly asked the Centre to scrap the Citizenship Amendment Act (CAA), approving Chief Minister Pinarayi Vijayan’s resolution in a special session convened on Tuesday. The resolution was backed by the ruling Left Democratic Front (LDF) led by the Communist Party of India (Marxist) and the opposition United Democratic Front (UDF) led by Indian National Congress. Lone MLA of the BJP in the 140-member Assembly marked his dissent. The resolution said that the approval of the Citizenship Amendment Bill in both the houses of the Parliament has resulted in several sections of the society getting anxious, leading to protests across the country. The new law is against the basic right of secularism ensured in the Part III of the constitution, the resolution stated. The provision to determine citizenship based on religion is against the basic structure of the constitution, which puts forward a secular vision, It said. O Rajagopal, the only BJP MLA in the Assembly, opposed the resolution and alleged that the LDF and UDF were supporting the protests against the law to gain political mileage. LDF and UDF had earlier shared platforms to protest against the CAA. In another resolution, the Assembly has requested the Centre to include extension of reservation for Anglo Indian community in Lok Sabha and State Assemblies for 10 years from 26th January, 2020 under the Constitution (One Hundred and Twenty-Sixth Amendment) Bill, 2019.