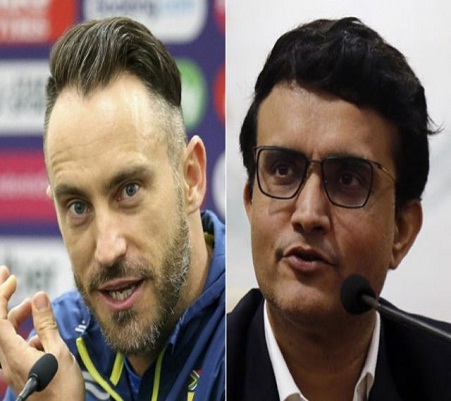 (G.N.S) Dt. 31
Centurion
South African captain Faf du Plessis has had he say on the plans of the big three of cricket- India, England and Australia – and it is fair to say he is not pleased. Du Plessis was talking to media after South Africa’s 107-run win over England and he was asked about his opinion about plans for an annual ‘Super Series’ of one-day games, involving the so-called ‘Big Three’, with one other country to be invited on a revolving basis. He said,“The last year or so you can see what’s going on in terms of the big three countries”. There’s a lot of movement going towards that, a lot more matches being played against the top three, or big three. It’s probably better if you include more teams, the better to grow the game as much as you can. While the South African captain also talked about inequality in fixtures, especially in Test cricket, with new Test nations such as as Ireland and Afghanistan struggling to get fixtures. He said,“There’s a lot of smaller nations not playing a lot of Test cricket, they’re actually playing less”. Super Series is one of the pet projects of BCCI president Sourav Ganguly, and he has made no qualms about it. Cricket Australia chief executive Kevin Roberts has termed Ganguly’s idea for a four-nation ‘ODI Super Series’ as “innovative” but stopped short of giving any commitment. Ganguly had said India will lock horns with England, Australia and one other top cricketing side in an annual ODI series starting 2021. The move is seen as a counter to prevent ICC from implementing their plan of having a global event organised by the international body in every calendar year. The move will not please everyone, as other nations are not in favour of a move they see as a blatant attempt by ‘Big Three’ to do as they please.