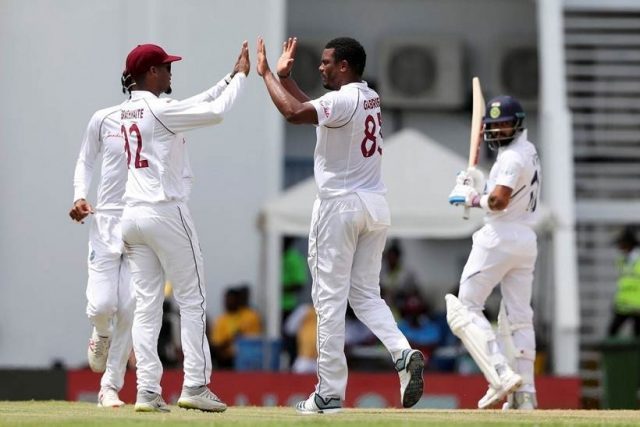 (G.N.S) Dt.23
North Sound (Antiga)
Ajinkya Rahane batted responsibly after the top order faltered as India finished the first day of the match on Thursday, the opening day of the first Test cricket match against the West Indies. By the time he had scored 203 runs at the loss of 6 wickets. Rahane looked in great shape after battling initially. He scored 81 runs with the help of 10 fours. Rahane shared 68 runs for the fourth wicket with KL Rahul (44) and 82 runs for the fifth wicket with Hanuma Vihari (32). Rishabh Pant was batting with 20 and Ravindra Jadeja scoring 3 runs till the end of the day’s play.
Rahane took the lead at a time when India quickly lost the wickets of Mayank Agarwal (five), the trusty Cheteshwar Pujara (two) and captain Virat Kohli (nine), taking the score to 25 for three within the first eight overs. India had scored 68 for three till lunch and 134 for four at tea time. India have lost the wicket of Vihari after the tea break which was caught by Kemar Roach (three for 29) at the hands of wicketkeeper Shai Hope. For the West Indies, Kemar Roach took three, Shannon Gabriel took two and Roston Chase took one wicket.