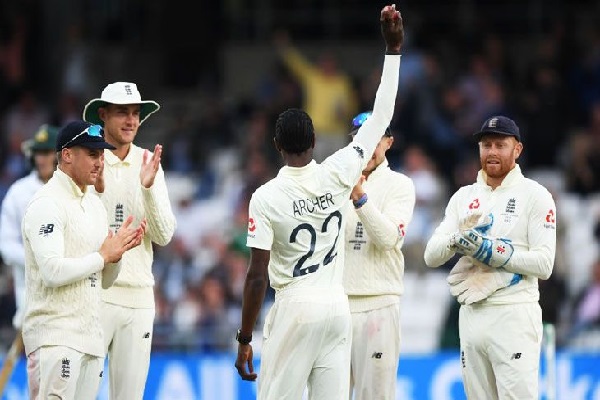 (G.N.S) Dt.23
Leeds
Dismissed pacer Jofra Archer bowling helped England’s third Ashes Test 179 runs in cricket’s first innings on Thursday, the first day of Australia’s matches. Playing his second Test match, Archer took six wickets for 45 runs. This is the first time in his career that he has taken five or more wickets in Tests. Apart from him, Stuart Broad took two and Chris Woakes and Ben Stokes took 1–1 wickets. Australia, who were playing without Steven Smith, lost two wickets early when they were invited to bat first after losing the toss, after which David Warner (61) and Marnus Labuschagne (74) added 111 runs for the third wicket. Apart from these two, only captain Tim Paine (11) reached double digits.
Australia did not have a good start. Archer caught Marcus Harris (eight) behind the wicket in the fourth over, while Broad sent off Usman Khawaja (eight) to take his place, bringing the score to 25 for two. Warner and Labuschagne took good responsibility amid the interruption of rain. Both of them did not let any wickets fall for 23 overs and in the meantime played a century partnership. Eventually Archer’s ball, which went at a speed of about 90 miles per hour, reached the wicketkeeper Jonny Bairstow’s gloves with the edge of Warner’s bat, which broke the partnership.
Warner faced 94 balls and hit seven fours. After this, Brad had Travis Head and Archer scattered Matthew Wade. Both these accounts could not even be opened. With this, the score was reduced to 139 for five from 136 runs. Chris Woakes also did not let Captain Penn last longer. Labuschagne, who replaced Smith as the last match, played a responsible innings. He was trapped lbw by Stokes. Labuschagne played 129 balls and hit ten fours before returning to the pavilion as the ninth batsman.