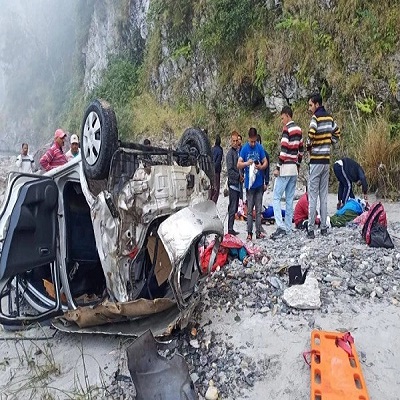 (G.N.S) Dt. 15
Mussoorie
About 40 km from Mussoorie, a car (number UK 07AB 6429) on the Nainbagh-Vikasnagar route uncontrolled fall into the ditch and flew away. Five people died on the spot in this tragic accident. According to the information, a car collapsed uncontrollably near the Nilad bridge in Nainbagh in Tehri district at around seven in the morning. There is also Yamuna River nearby.
Seven people were riding in the car. In addition to the five dead, the dead people have been two seriously injured in the accident. Police and SDRF teams are present on the spot. It is being told that the injured will be airlifted from here to AIIMS Rishikesh. Lukhamandal, a resident of Buraram, informed the police about the accident. After which the accident was detected and the police reached the spot. It was told that the vehicle was going from Dehradun to Lakhamandal.