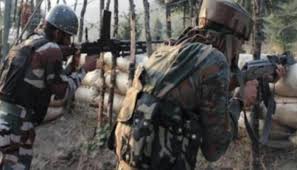 Acting on specific inputs about the presence of terrorists in Tilwani Mohalla Waggad in the Tral area of Awantipora, in south Kashmir’s Pulwama district. As security gorces started the operation, top terrorist commander of Jaish-e-Mohammad (JeM) Sham Sofi started firing and in an encounter he was killed.