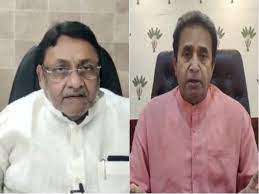 Both the politicians moved the apex court earlier in the day after the Bombay high court dismissed their bail petitions on Friday (June 17).
All the ruling allies of the Maha Vikas Aghadi fielded two candidates each for the MLC polls. The opposition BJP nominated as many as five candidates.