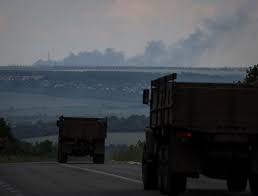 The governor of Luhansk province, Serhiy Gaidai has said that Russians forces had destroyed a bridge over the Siverskyi Donets River linking Sievierodonetsk with its twin city of Lysychansk.

That leaves just one of three bridges still standing, and reduces the number of routes that could be used to evacuate civilians or for Ukrainian troops to withdraw to positions on the western side of the river.

In Lysychansk itself, Russian shelling killed one woman and destroyed four houses and a shopping centre, Gaidai said.
The head of the Sievierodonetsk administration said a little more than a third of the city remained under the control of Ukrainian forces and about two-thirds were in Russian hands.