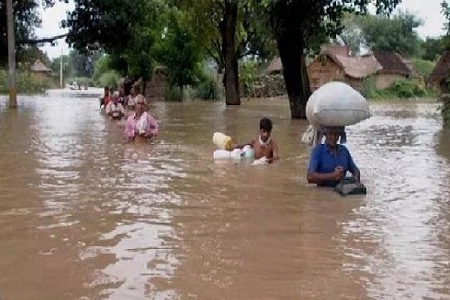 (G.N.S) Dt. 29
New Delhi, Patna
Monsoon is passing havoc all over the country. Flood-like conditions persist in many areas of UP, Bihar, Uttarakhand, Himachal, Jharkhand, Madhya Pradesh and Maharashtra. Heavy rains have continued in these states for the last three days. Due to this, more than 80 people have lost their lives so far. September is the last week and the monsoon is in its last stop. For the first time in 60 years, this year the monsoon is expected to be delayed by 15 days. According to the Meteorological Department, this time the monsoon may continue till October 15. This is the first time since 1960, when the monsoon will say goodbye with such a delay.

”Heavy rain forecast in many districts of Himachal even today”

The average rainfall in the country is about 869 mm. However, so far 931.6 mm of rain has been received. This means that the country has received seven percent more rainfall than usual. According to the Meteorological Department, 16 states of the country have received normal while eight states have received less than average rainfall. Bihar is suffering from rains. After heavy rains, water has been flooded from the roads to the houses. In many places there is also water accumulation on the rail tracks. Flood-like conditions have occurred in the capital Patna. At the same time, even the wards and ICU at Nalanda Medical College have been flooded. The Meteorological Department has issued a red alert in 15 districts of the state regarding heavy rains in the next one or two days. In view of the possibility of heavy rains, the Nitish government has closed schools in most districts including Patna and Bhagalpur.
More than 13 trains have been affected due to flooding of railway tracks at Patna Junction. According to information received from the railway, six trains were canceled, while the route of five other trains was changed. The Meteorological Department has said in its forecast that most areas of Bihar will be cloudy for the next one or two days and heavy rains are expected in many areas. Continuous rains continue in many districts of Bihar. It is raining in several other districts including Muzaffarpur, Gaya, Jamui, Aurangabad, Darbhanga, Purnia, Bettiah, Jahanabad, including Patna and Bhagalpur. On the instructions of Chief Minister Nitish Kumar, the District Magistrates of many districts have declared leave in schools for the next two days.