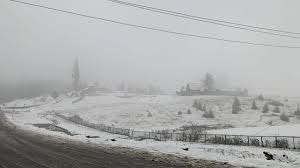 Due to rains and snowfall, many parts of Jammu and Kashmir are heavily affected, Srinagar-Leh highway and Mughal road are closed.

MeT said that the rains began in the plains post-midnight on Monday while light to moderate snowfall was also recorded in mountains, including the ski resort of Gulmarg in north Kashmir, Sonamarg areas in central Kashmir and near Pir Ki Gali.

J&K Traffic department said that the Srinagar-Leh highway was closed after the snowfall in central Kashmir’s Sonamarg, while the Mughal road was closed due to snowfall in Pir Ki Gali connecting south Kashmir to Poonch and Rajouri districts of Jammu.

“Srinagar-Jammu national highway was open for the traffic in the morning, though rains continued in many parts,” the traffic officials added.

Srinagar-Jammu highway was closed temporarily during the day between Chanderkot and Banihal due to shooting stones and mudslides. The traffic officials later said that traffic was restored after the road was cleared of the blockades.

“All the affected stretches have been restored and the highway is through for traffic now,” said Ramban SSP, Mohita Sharma.