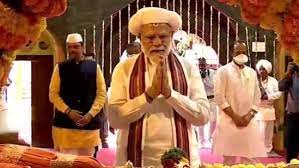 Prime Minister Narendra Modi arrived in Pune and was received by Deputy CM Ajit Pawar, LoP Devendra Fadnavis & and other dignitaries. The PM will inaugurate 17th-century saint Tukaram Maharaj temple in Dehu near Pune. A prominent name in the Bhakti development, Tukaram was a warkari saint and writer. He was known for ‘abhanga’ devotional poetry and community-oriented worship through spiritual songs known as kirtans.