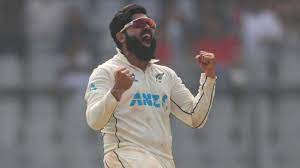 India-born New Zealand’s left-arm spinner Ajaz Patel has won the ICC Player of the Month award for December following his 10-wickets against Indian team in the second Test in Mumbai.

Ajaz was nominated for the award alongside India opener Mayank Agarwal and Australian pacer Mitchell Starc but beat them to it on the back of his incredibly rare feat.

Ajaz picked up 14 wickets in the Mumbai Test match in early December against India, including all 10 in the first innings, to become only the third player in Test history, after Jim Laker and Anil Kumble, to achieve this milestone.