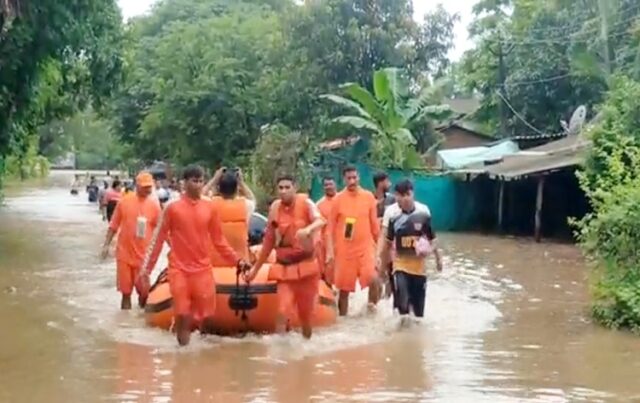 The India Meteorological Department (IMD) said a depression had formed this morning over the northeast Arabian Sea and off the coast of Saurashtra, and that as of 11.30 am it was 70 km south-southwest of Okha and moving in a north-northwest direction.

The National Disaster Response Force (NDRF) personnels conduct a rescue operation to save stranded locals from the flood-hit areas in Gujarat.

Dozens of birds and animals, including cows, had to be rescued from villages in flood-affected areas of Navsari district. At least 811 people had been rescued from here in one day, P Swaroop, the relief commissioner said.

Due to heavy rains widespread flooding in parts of Gujarat, including rising water levels in Tapi River in Surat due to incessant heavy rainfall. A drone shot of the Tapi, taken Friday, shows a vast muddy stretch of the river in heavy flow.
On the horizon the river seems to expand almost as if it were a sea or an ocean and, as the camera pans, little patches of green can be seen in the middle of the river.

Veri Dam in Rajokt district’s Gondal overflowing; there is so much water that even though the dam’s gates are open and a torrent of water is flowing downriver, there is more water flowing over the top of the wall.