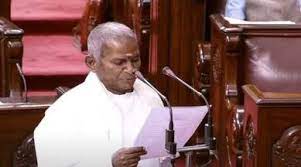 Well known musician Ilaiyaraaja from Tamil Nadu was sworn in as the MP in Rajya Sabha on Monday after President-elect Droupadi Murmu was administered oath as the 15th President of India by Chief Justice of India N V Ramana at the historic Central Hall of the Parliament House. Earlier this morning, Murmu paid tributes to Mahatma Gandhi, father of the nation, at Raj Ghat.

He was nominated to the Upper House on Wednesday along with three other distinguished personalities from various walks of life. Sports icon PT Usha, popular screenwriter V Vijayendra Prasad and philanthropist and spiritual leader Veerendra Heggade were the other three newly nominated Rajya Sabha members.