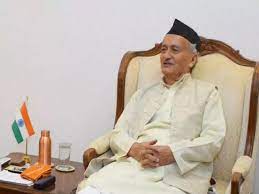 Maharashtra Governor Bhagat Singh Koshyari has sent letter to the Secretary of the Maharashtra legislative assembly, calling for a special session on Thursday, June 30 for a test of strength in the state assembly.

After the demand to prove majority, leaders of CM Thackeray’s team approached the Supreme Court of India claiming that Governor Koshiyari’s request is illegal as 16 rebel MLAs are yet to respond on possible disqualification. The Supreme Court will hear the matter at 5 pm.

Eknath Shinde has claimed the support of nearly 40 (out of 55) Sena MLAs, thus pushing it the Maha Vikas Aghadi government – comprising Shiv Sena, Sharad Pawar’s Nationalist Congress Party (NCP), and Congress – to the brink of collapse. He said he and the rebel MLAs camping with him in Guwahati in BJP-ruled Assam will be back in Mumbai on June 30.