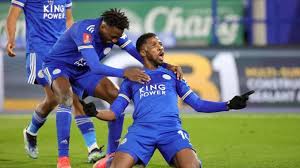 Manchester United out from FA cup by Leicester City as Kelechi Iheanacho’s double sealed a 3-1 quarterfinal win, while Chelsea will face Manchester City in the semifinals after they beat Sheffield United.

Brendan Rodgers’ side can look forward to meeting Southampton in their first FA Cup semifinal since 1982 thanks to Iheanacho’s predatory finishing at the King Power Stadium.
He put Leicester ahead in Rodgers’ 100th game in charge before Mason Greenwood equalized late in the first half.