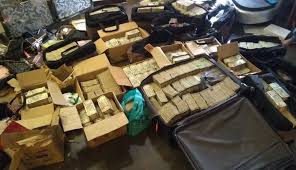 (G.N.S) Dt. 26
Hyderabad
A senior ED official said substantial sums of foreign currencies were seized during searches. “The total foreign exchange found was $2.5 million (Rs 18 crore). Foreign exchange in other currencies has also been found and seized. This is a violation of FEMA,” said the official. Enforcement Directorate booked a case under Foreign Exchange Management Act (FEMA) against self-styled godman Kalki Bhagwan and his son NKV Krishna for possession of foreign currency, which was unearthed during recent income-tax searches.
Preliminary estimate of unaccounted cash receipts was Rs 409 crore from 2014-15 financial year onwards. I-T sleuths seized Rs 43.9 crore on premises of Kalki at Varadaiahpalem in Chittoor district in AP and his son’s offices. I-T officials said the case pertained to a conglomerate of trusts and companies that run wellness courses and training programme in philosophy and spirituality in Varadaiahpalem, Chennai and Bengaluru. Substantial quantities of undisclosed gold in form of jewellery, 88 kg valued at Rs 26 crore, has also been seized. Undisclosed diamonds valued at Rs 5 crore were seized. The total value of seizure so far is approximately Rs 93 crore. The undisclosed income of group detected so far is over Rs 500 crore.

Indian equity markets are cheering at their all-time highs, snubbing the volatility of global markets. The broader market is also trying to catch up...