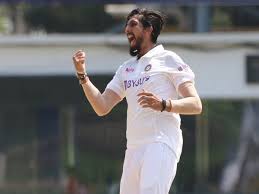 (G.N.S) Dt. 24 Ahmedabad Indian cricket team’s fast bowler Ishant Sharma became the second India fast bowler to play 100 Test matches when he bowled the first over of the pink-ball Test against England at the Narendra Modi Stadium, Ahmedabad. Ishant also became the fourth Indian bowler to achieve the glorious milestone. The fast bowler, who is now behind former skipper Kapil Dev as the only pacer to reach the