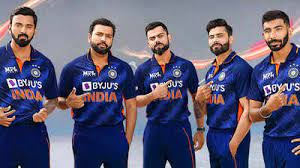 BCCI has unveiled new jersey of Indian cricket team will be sporting at T20 World Cup. The new kit is called the ‘Billion Cheers Jersey’ which replaces the 1992 World Cup pattern-like jersey the team had been donning since late 2020.
BCCI tweet’s, “Presenting the Billion Cheers Jersey! The patterns on the jersey are inspired by the billion cheers of the fans.”

The jersey has been launched by MPL Sports, the official kit sponsors of the Indian cricket team. “This isn’t just a Team, they are the pride of India. This isn’t just a jersey, it is the blessing of a billion fans. Get ready to cheer for Team India,” it tweeted.

The new kit stick with the dark blue pattern which replaced the traditional navy blue back in December last year. It was during India’s tour of Australia that the Indian cricket team sported a kit that much resembled India’s 1992 World Cup jersey, with stripes of Blue, Green, Red and White.