(G.N.S) Dt. 15
Agra
Police busted an illegal arms factory in Kotwali Nagar area of Etah district on Wednesday and arrested two persons. They also seized 11 country-made pistols and a shotgun from them.
The accused were identified as Shabir Ali and Asif Ali of Jaithra.
Talking to media, Etah additional superintendent of police Sanjay Kumar said, “Based on a tip-off, a SWAT team and Kotwali Nagar police raided a factory on Aliganj Road and found two men making country-made weapons. Hence, we arrested them and seized 11 pistols of .312 calibre, a 12 bore shotgun and raw materials.”
Police have registered a case against the accused under relevant sections of Arms Act. They have also invoked Gangster Act against the duo. 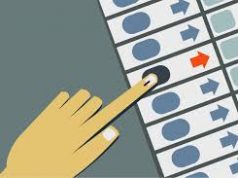