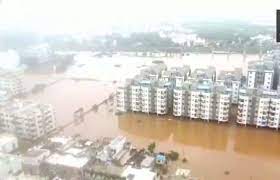 Navsari collector said that the NH had been closed temporarily after flood water inundated the road. “A flood-like situation is still there in three talukas, Navsari, Gandevi and Jalalpore, and our teams are engaged in rescue work,” Yadav said.

Areas in these districts are facing flood-like conditions and thousands of people have been relocated. Schools and colleges have been shut and converted into temporary shelters for affected people.

In regions like Navsari, Valsad, and Surat, the rain intensity is expected to reduce from July 15 and the Red Alert has been converted into an Orange one. Junagarh, Porbandar, and Bhavnagar are on Red Alert for Friday too.

“We have been monitoring the situation and updating the information. Rain activities will continue in the region for the next three days. In areas like Valsad and Navsari, rain intensity will be reduced, but heavy rain can be observed at isolated places,” said an IMD official.