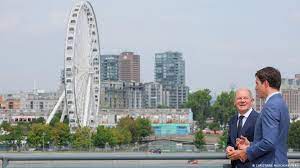 On the second day of German Chancellor Olaf Scholz’s inaugural trip to Canada, in a historic step, Germany and Canada have signed a cooperation agreement for the production and transport of hydrogen.

The two leaders signed the deal in the port town of Stephenville, Newfoundland.

The first deliveries are expected in just three years.

Earlier on Tuesday, the two heads of government attended an economic conference in Toronto.
Germany seeks options as it tries to move away from Russian gas.

The trip to Canada, Scholz’s first as chancellor, comes as Germany looks for ways to reduce its reliance on Russian gas.
At a press briefing in Toronto Tuesday, Scholz said Canada was the partner of choice, as Germany moves away from Russian energy imports at “warp speed.”

“Your country has almost boundless potential to become a superpower in sustainable energy and sustainable resource production,” he said.
The pair also said they would discuss the possibility of Germany buying Canadian liquefied natural gas (LNG).