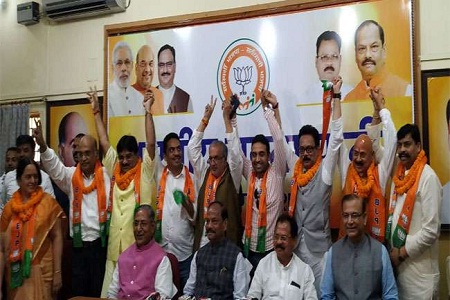 (G.N.S) Dt. 23
Ranchi
Just before the Jharkhand assembly elections, the Congress and the Jharkhand Mukti Morcha (JMM) have suffered a severe blow. Former MLAs including former IAS Suchitra Sinha and RP Sinha and former IPS joined BJP on Wednesday in front of CM Raghuvar Das. CM welcomed everyone to the BJP. The talk of the MLAs joining the BJP at the meeting ceremony held at the BJP state office has been stampeded. Chief Minister Raghuvar Das was also present in the ceremony. Apart from officers and MLAs, Lalit Ojha, who was an AJSU leader, also joined BJP to paint saffron. The 6 MLAs of the opposition parties, Kunal Sarangi (Jharkhand Mukti Morcha), JP Bhai Patel (JMM), Chamra Linda (JMM), Sukhdev Bhagat (Congress), Manoj Yadav (Congress) and Bhanu Pratap Shahi are the 6 MLAs who joined BJP Of.
After receiving information about Congress MLA Sukhdev Bhagat joining the BJP, several leaders including Congress co-incharge Umang Singhar and State Congress Working President Manas Sinha reached Lahardaga on Tuesday to meet at his residence. JMM has suffered a major setback with JMM legislator Kunal Shadangi joining the BJP. Kunal’s background has been BJP’s from the very beginning. In 2005, his father Dinesh Kumar was a BJP MLA from Shadangi Bahragadera seat. At the same time, Mandu MLA Jayaprakash Patel was expelled from the party by Jairamme during the Lok Sabha election. After this, he said – JMM is now a party, not a private limited company. After this he openly worked for BJP in the Lok Sabha elections.