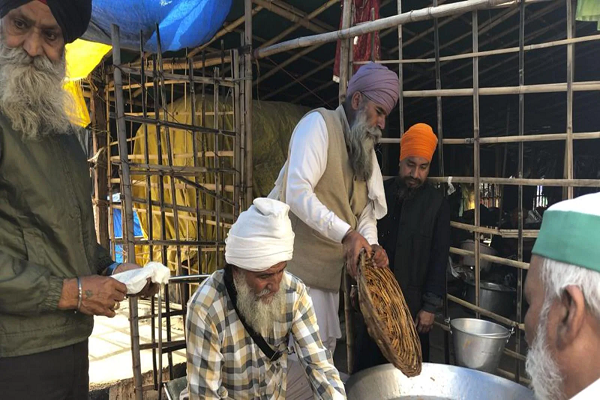 Termed as a victory Prime Minister Narendra Modi’s Friday announcement that the government will repeal three controversial farm laws passed in Parliament in 2020, Farmers camped at the Delhi border at UP Gate since November 26, 2020 distributed jalebis.

Rakesh Tikait, national spokesperson of the Bharatiya Kisan Union (BKU) and one of the principal leaders of the protesting farmers, indicated that the agitation would not be suspended yet. “The agitation will not be taken back immediately. We will wait for the day when the farm laws are rolled back in the Parliament. The government should talk to farmers on the issues of MSP and others,” he tweeted.

Jagtar Singh Bajwa, farmer leader from Uttarakhand and the UP Gate site’s spokesperson for SKM, an umbrella body of several farm unions, said that, “It is indeed a victory of the yearlong agitation by farmers, and about 700 of them also gave their lives to the cause of this agitation. The PM’s announcement has come on the day of “Prakash Utsav” (Guru Nanak’s birthday) and it is a welcome step. Still, we will wait and watch till the laws finally get repealed. Further, a law on MSP should be passed. The Samyukt Kisan Morcha (SKM) will roll out further strategy in coming time but for now the protest site will continue to operate.”
“The government is feeling the heat of the continued agitation by the farmers, and the decision has come ahead of assembly elections in several states being round the corner,” Bajwa added.

Prabal Pratap Singh, spokesperson for BKU (Asli), has said that, “The decision has come ahead of the assembly elections in UP, and it shows that the government is feeling the heat of the sustained efforts by the farmers put in the movement for almost a year. The decision by the PM is welcome step and we will wait to see it turning into reality. Further, there were other demands like law on MSP which should be fulfilled for benefit of farmers.”