– Rupani interrupted his function and was on phone for 10 minutes

Differences between Mr. Nitin Patel and Chief Minister Vijay Rupani cropped up on Thursday before the first Cabinet meeting in which ministers were supposed to be distributed the departments. Due to differences, the meeting, scheduled to ‪start at 5 p.m., commenced ‪only at 9 p.m. after a marathon meeting at the Chief Minister’s residence where  Mr. Rupan, Mr. Nitin Patel and State party President Jitu Vaghani assigned portfolios to new ministers after consultations with the party brass in New Delhi.

Soon after the deputy CM’s ultimatum, patidar organisation Sardar Patel Group announced a bandh in Mehsana, the hometown of Prime Minister Narendra Modi, on Monday to put pressure on the state government. Patel reportedly is miffed at being stripped off three key portfolios that he held in the outgoing government — Finance, Urban Development and Petroleum. When portfolios were allocated late on Thursday after a marathon cabinet meeting, the Finance portfolio was handed over to Saurabh Patel, while Rupani kept Urban Development and Petroleum for himself.

Signs that all is not well with the new government were evident on Friday, when a sulking Nitin Patel did not attend office. He met well-wishers at his home. Patel is also said to have called on senior party leader Anandiben Patel and expressed his displeasure, though no one from the party was willing to admit this.

“Nitinbhai is upset at not getting the Finance department,” a senior party leader said, adding, “despite being Deputy Chief Minister, he is not dealing with any important portfolios like Home, General Administration, Industries, Mines and Minerals, Finance, Urban Development or Revenue.”

After the Cabinet meeting, Mr. Rupani, Mr. Nitin Patel and Mr. Vaghani held a press conference in which Mr. Rupani ruled out any differences. Mr. Patel, however, did not talk.

On Saturday, a delegation of Patidar leaders from Mehsana — Nitin Patel’s district — in North Gujarat met him at his house and extended their support to him. In the new government, he has got roads and buildings, Narmada, health, medical education and capital projects. According to party insiders, the central leadership is sending a senior leader to mediate and end the crisis. Meanwhile, quota agitation leader Hardik Patel invited Mr. Nitin Patel to join his stir to fight for justice to the Patidar community.

“Nitinbhai can join in our fight for justice. After all, he got only lollipops in the BJP,” the 24-year-old Mr. Hardik said in Botad where he is holding a Patidar Anamat Andolan Samiti (PAAS) meeting to deliberate and discuss their future strategy.

Kirit Patel, a Patidar leader from Mehsana told the media after the meeting, “We are with Nitin Patel. Clearly, injustice has been done to him as he is the seniormost Patidar leader in the government.”

Purvin Patel, the leader of Sardar Patel Group, another Patidar organization, said, “The Patidar community is with Nitin Patel. The departments that he was in charge of have been snatched away from him. This amounts to injustice.”

The allocation of portfolios itself was clearly a difficult task for CM Vijay Rupani. With former finance minister Saurabh Patel back in the Cabinet, it was evident that Nitin Patel’s Finance portfolio would be allocated to him. However, sources say that snatching away of the Urban Development and Petroleum portfolios miffed Nitin Patel further.

Interestingly, Vijay Rupani, Nitin Patel and 18 other ministers were sworn in on the morning of December 26 and a Cabinet meeting to allocate portfolios was scheduled immediately after the swearing-in ceremony. However, it was put off indefinitely and portfolios of the new Cabinet were announced late on December 28.

“Nitin Patel continues to be the number two in the new government as the deputy chief minister. It is incorrect to say that he is not number two since finance portfolio was given to another minister,” Rupani said after the allocation of portfolios.

“There were no differences on anything and the government will utilise Nitinbhai’s experiences and expertise,” Mr. Rupani said as Mr. Patel looked on with a sullen face. In the new government, Mr. Rupani has kept home, general administration, industrial and mines and minerals and urban development and petrochemical departments with himself.

On Saturday, while inaugurating the annual flower show event at the Sabarmati riverfront, Rupani received a phone call while he was on stage. He stepped aside and took the call. Given the fact that Rupani interrupted his function and was on phone for 10 minutes, speculation was rife that he had received a call from someone very highly placed in the party over the Nitin Patel issue. Saurabh Patel, who was dropped from the Cabinet when Mr. Rupani took over as Chief Minister in 2016 after a series of allegations of irregularities and nepotism against him, has been rehabilitated now. He has been given Finance and Energy.

Quick to react to the rift, Patidar Ananmat Andolan Samiti (PAAS) Hardik Patel said he would meet Nitin Patel. “I have messaged him and sought time to meet him.” Nitin Patel was a frontrunner to replace Anandiben Patel in 2016. His family also distributed sweets and posed for the camera before a last-minute change brought Rupani to power, with Patel as his deputy. 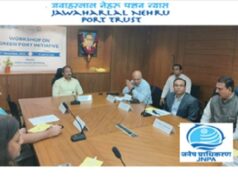