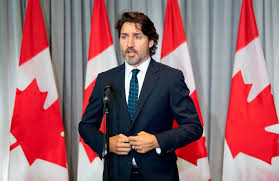 (G.N.S) Dt. 23 Ottawa Saying that Moscow’s recognition of two districts in Ukraine as “independent republics” was “a further invasion of a sovereign state, and it is completely unacceptable”, Canadian PM Justin Trudeau has declared economic sanctions on Russia. Canadian PM Trudeau declared the sanctions at a press conference, with foreign minister Melanie Joly and minister of national defence Anita Anand present. The press briefing was also attended by deputy