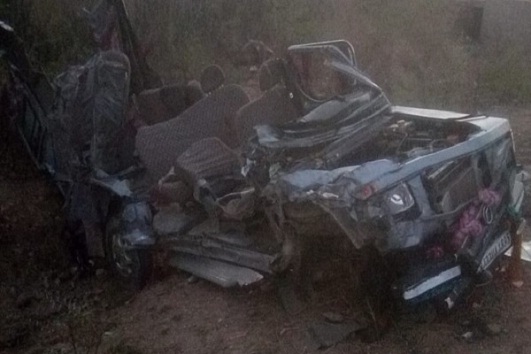 (G.N.S) Dt. 11
Jaipur
A tragic accident claimed seven lives and left several others injured in Mandalgarh area of Bhilwara district. The mishap occurred after a jeep collided with a Rajasthan Roadways bus. Most of the victims were travelling in the jeep. More than 20 passengers travelling in the bus also sustained injuries. The critically injured victims have been admitted to the district hospital in Bhilwara for treatment. The police have launched an investigation as to what caused the mishap.
According to police officials, the accident took place near Mandalgarh. The jeep collided with a Rajasthan Roadways bus. The collision was so intense that the entire front portion of both the vehicles was severely damaged. The local residents informed the police following which police and district administration officers rushed to the spot and launched a rescue operation.
The victims were rushed to a hospital where doctors declared seven of them dead. The seriously injured victims were taken to the district hospital. The death toll may increase, the officials said.
Chief minister Ashok Gehlot expressed condolences for the victims. “Deeply saddened to know of a terrible road accident in Mandalgarh in which many lives have been lost. My thoughts and prayers are with bereaved families”.
Gehlot tweeted, ”May God give them strength to bear this loss. Have directed officials to ensure the best possible treatment to injure”.