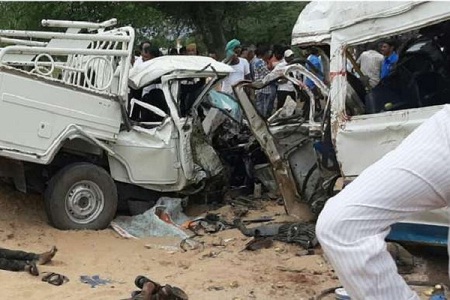 (G.N.S) Dt. 27
Jodhpur
At least sixteen people have died in a face-to-face collision between Passenger bus and a camper Jeep on Friday afternoon near Balesar, about 60 km from Jodhpur city of Rajasthan, killing half a dozen people on the spot by the time help arrived. All the deceased belong to Balesar.
Two more people lost their lives during rescue efforts while 24 people are under treatment. The death toll is expected to increase further.
The rescue operations were started by local people who reached the spot first and helped many people who were trapped inside the vehicles to come out. The police team reached the spot soon and moved some of the injured to the Balesar Hospital. Later, all the injured were sent to the hospital on available vehicles.
According to Balesar SHO Devendra Singh, eight people died while undergoing treatment and the seriously injured have been referred to Mathuradas Mathur Hospital in Jodhpur.
An eyewitness said the minibus that was going from Jodhpur towards Jaisalmer collided with the Bolero that coming from the opposite side during the jeep driver’s attempt to overtake another minibus. Both the vehicles were travelling at a very high speed that they were completely shattered following the collision. People riding in both vehicles were trapped inside.
Rajasthan CM Ashok Gehlot has expressed his grief over the incident .”Extremely pained by the loss of lives in a terrible road accident in Balesar, Jodhpur on NH 125. My thoughts are with the bereaved families. May God give them the strength to bear this terrible loss. Hope and pray those injured recovers soon.” Tweeted Chief Minister Ashok Gehlot and mourned the accident. BJP state president Satish Poonia has also mourned the dead.