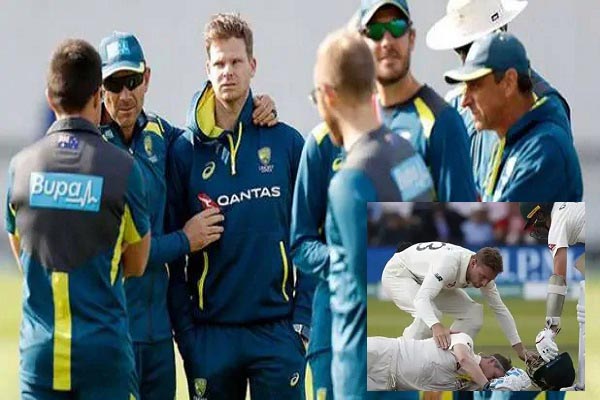 (G.N.S) Dt.20
Leeds
Australian batsman Steve Smith has been ruled out of the third Test of the Ashes series against England. Smith will be replaced by contender Marnus Labuschagne, who replaced Smith at Lord’s as a replacement batsman. During this, he played a half-century innings. Smith had previously feared not taking part in the Leeds Test as, he did not participate in Australia’s first net session.
Smith was injured on the fifth day of the second Test by Jofra Archer. Due to which he had to leave the crease. When Smith was playing for 80, the English paceman Archer’s delivery at a speed of 92.3 mph hit the middle of his neck and head where there was no helmet. Smith fell face down. Smith was treated on the ground by medical personnel from Australia and England. He then got up and decided to retire retired after a lengthy conversation with Australian team doctor Richard Saw.
Smith, however, returned to bat after about half an hour and also faced a hooting from the England audience. The former captain was lbw to Chris Woakes after scoring 92 runs. After being injured, Marnus Labuschagne was added to the squad as a replacement batsman in place of Smith. This happened for the first time in Test history. Let us know that the third Test between the two teams will start in Leeds from 22 August.