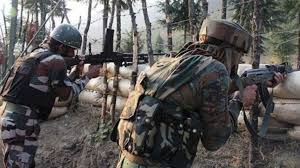 In an encounter with the security forces, two terrorists were killed in south Kashmir’s Kulgam. While the police are yet to identify the militants, sources say that both of them were locals who likely belonged to the Al Badr militant outfit.
A joint team of Jammu and Kashmir Police, army and paramilitary forces cordoned off the Hussanpora village of Kulgam after they had received inputs about the presence of the militants in the village.

The hiding militants opened fire and tried to break the security cordon, said the police. The forces returned the fire thus foiling the militants’ attempt to escape from the area and eventually killed the two militants.