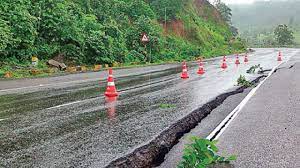 The vehicular movement on Nashik-Mumbai highway near Kasara Ghat and railway traffic on the Kasara railway line were affected because of two landslides.

A day ago about 11pm, the Kasara police received information about a landslide in Kasara Ghat on the Mumbai-Nashik National Highway. The police, despite a lack of enough personnel at night, tried to manage the situation. “A team of officials managed traffic with the help of torches and shifted it to a single lane. Later the National Highways Authority sent a team to clear the road with the help of JCBs, which was completed at 5am,”said Kasara highway police officers.

Later on the same day, around 6am, a landslide took place near one of the lines at the Kasara railway track. A railway officer, requesting anonymity, said, “ We have shifted traffic from down line to middle line and the up line is already running properly. Other lines are intact and railway service is running efficiently.”

In another incident, two houses in Kasara Shivaji Nagar collapsed on Monday morning; however, no injuries were reported and the families were given shelter at the zilla parishad school nearby.