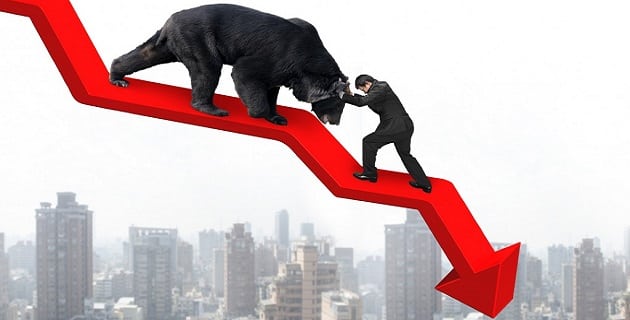 Indian bourses continued to trade in red terrain in today session, with the Sensex losing over 337 points and Nifty falling below the 17700 level, amid weak Asian cues. Sentiments were dampened as U.S. Federal Reserve raised interest rates and indicated it would raise rate more often than markets had expected. Traders were also worried as foreign institutional investors (FIIs) have net sold shares worth Rs 461.04 crore on September 21, as per provisional data available on the NSE.

Additional pressure also came with private report stating that India’s headline retail inflation is expected to rise to a five-month high of 7.4% in September, with the risk of going higher if the momentum of food and vegetable prices picks up further in the rest of the month. Depreciating rupee too added pressure on the markets. The partially convertible rupee was at 80.76, down 0.80 paise against its previous close of Rs 79.96 against US dollar.

Meanwhile, Union Power Minister R K Singh has exuded confidence that the second version of production linked incentive (PLI-II) scheme for solar manufacturing worth Rs 19,500 crore, will help save close to Rs 1.4 lakh crore forex every year and it will also result in a huge quantity of inflows on account of exports.

The minister stated that one of the benefits expected from the PLI scheme is that about 65,000 MW per annum manufacturing capacity of fully and partially integrated solar PV modules would be installed. The scheme is expected to create direct employment of about 1,95,000 and indirect employment for around 7,80,000 people. Besides, the scheme will bring a direct investment of around Rs 94,000 crore. He noted that the national programme on high-efficiency solar PV modules aims to build an ecosystem for manufacturing of high-efficiency solar PV modules in India, and thus reduce import dependence in the area of renewable energy. It will strengthen the Atamnirbhar Bharat initiative and generate employment.

Singh further said solar PV manufacturers will be selected through a transparent selection process. PLI will be disbursed for five years post commissioning of solar PV manufacturing plants on sales of high-efficiency solar PV modules from the domestic market will be incentivized. He added that the first round PLI-I was worth Rs 4,500 crore for 8,700 MW of manufacturing capacity.

Technically, the important key resistances are placed in Nifty future are at 17707 levels, which could offer for the market on the higher side. Sustainability above this zone would signal opens the door for a directional up move with immediate resistances seen at 17808 – 18008 levels. Immediate support is placed at 17575 – 17505 levels.