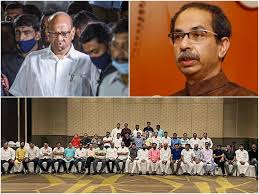 A disqualification has been served by the deputy speaker of the Maharashtra assembly to Sixteen Shiv Sena MLAs who have allied with rebel leader Eknath Shinde, in his bid to force the party to sever ties with the Congress and the Nationalist Congress Party, and re-align with the BJP.

Should they be disqualified Eknath Shinde will lose his legislator’s post and that, crucially, will see his revolt fail.
Shinde on Friday responded to the Sena’s move seeking this disqualification notice by challenging the deputy speaker – Narhari Zirwal – to act.

Two independent MLAs – Mahesh Baldi and Vinod Aggarwal, who are seen as close to the Bharatiya Janata Party – filed a notice reminding him a no-confidence notice against him is still pending and, as such, he had no authority.