(G.N.S) Dt. 26
New Delhi
The benchmark indices pared all losses to hit fresh highs in the last leg of trade, with the Nifty50 and Sensex ending above their crucial 10,500, and 34,000 levels, respectively. Among individual stocks, Reliance Communications rallied nearly 41% to Rs 23 on the BSE after Anil Ambani, Chairman, Reliance Group said RCom’s debt will get reduced by about Rs 25,000 crore through the sale of some of its spectrum, tower and real estate assets. Meanwhile, the markets have been hitting record highs this month after victories in key state elections by Prime Minister Narendra Modi’s ruling party boosted investor sentiment, raising hopes of a continuation in the government’s reform agenda.Overseas, Asian markets were mixed in a holiday-truncated week as investors remained on the sidelines in the absence of fresh cues. 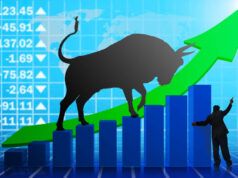