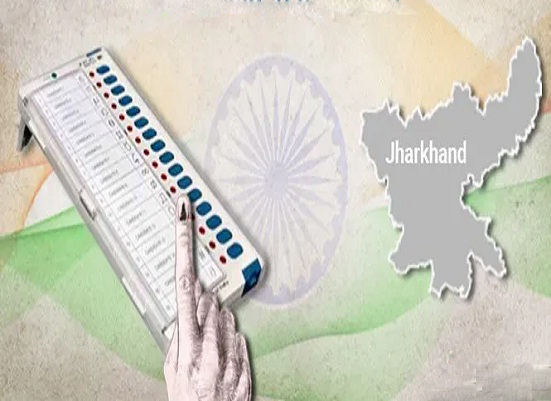 (G.N.S) Dt. 20
Ranchi
In fifth and last phase of Jharkhand assembly elections, votes are being cast for 16 assembly seats in Santhal region. The fate of 236 candidates is being decided in this phase. The Santhal region is considered to be the stronghold of the Jharkhand Mukti Morcha (JMM). In this phase 40,05,287 voters are exercising their franchise. Of the 16 seats where voting is taking place, seven seats are reserved for the Scheduled Tribes. In the 2014 assembly elections, six of these were won by JMM and five by BJP.
According to the state’s Chief Electoral Officer Vinay Kumar Choubey, a total of 5,389 polling stations have been set up for all these seats, of which 269 are located in urban areas and 5,120 in rural areas. There are 20,49,921 male, 19,55,336 female and 30 third gender voters in this phase. There are 93,779 new voters (aged 18–19). Apart from this, 41,505 and 49,446 disabled voters above 80 years of age are included. Voting will begin at 7 am. Polling will be held in Naxal-affected noon Borio, Barhet, Littipara, Maheshpur and Shikaripada at 3 pm and the remaining 11 seats by 5 pm.
CEO Choubey said that webcasting has been arranged at 1,347 polling stations for the fifth phase election. At the same time, 249 Adarsh ​​polling stations and 133 women-run polling stations have been set up. Vinay Kumar Choubey said that in the fifth phase, 1717 polling stations have been declared as very sensitive and 1,973 sensitive. Armed personnel have been deployed at these polling stations. The fate of former chief minister and Jharkhand Mukti Morcha executive chairman Hemant Soren, several state ministers and Pradeep Yadav of Jharkhand Vikas Morcha are at stake in this phase. Soren Barhet and Dumka are contesting from both seats.