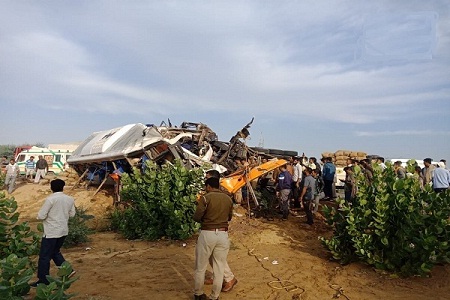 (G.N.S) Dt. 18
Bikaner
A truck and bus collided on National Highway 11 in Sri Dungargarh near Bikaner district in Rajasthan. 10 people have died in this incident while 20-25 people have been injured. The injured have been admitted to a nearby hospital.
According to the information received, the bus was going from Bikaner to Jaipur. He caught fire after the collision. A senior police officer present at the scene said that the accident took place between Jodhasar and Seruna village on Bikaner Jaipur highway at 7.30 am. A bus full of passengers collided with the truck, killing 10 people. The administration reached the spot after receiving information about the incident. From where the injured have been admitted to Bikaner and nearby hospitals. The removal of the bus and truck from the crane is underway at the accident site.