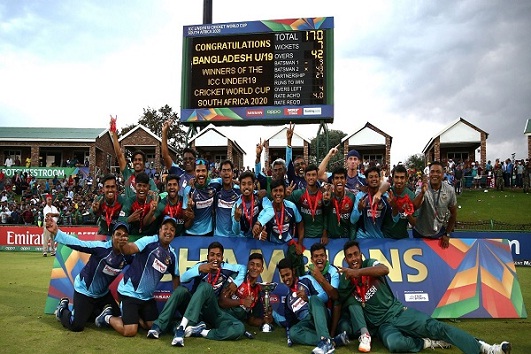 (G.N.S) Dt. 10
Potchefstroom
Bangladesh clinched their maiden ICC U-19 World Cup title after defeating favourites India by three wickets in the summit clash here on Sunday. Bangladesh won the toss and bowled first, bowling out four-time champions India for 177 runs in 47.2 overs and then reaching the target by losing seven wickets under Duckworth-Louis rule with 23 balls to spare. Bangladesh has managed to win the ICC World Cup for the first time at any level. At the same time, India’s dream of becoming champion for the fifth time was broken. India had earlier won the title in 2000, 2008, 2012 and 2018. For the third time India has had to be content with the runners-up. Earlier, in 2006 and 2016, they had to satisfy the runners-up by losing in the finals.
Chasing a target of 178 runs from India, Bangladesh got off to a good start with Parvez Hossain Emon (47) and Tanzid Hasan (17) sharing a 50-run stand for the first wicket. Bangladesh then lost their six wickets within the next 52 runs. These six wickets include the wickets of Mahmudul Hasan Joy (8), Towhid Hridoy (0), Shahadat Hossain (1), Shamim Hossain (7) and Avishek Das (5) apart from Tanzid. After losing their six wickets for 102 runs, all hopes of Bangladesh now rested on Eamon and captain Akbar Ali (43 not out). Bangladesh were again holding their own in the match with a 41-run partnership for the seventh wicket between Eamon and Ali. But then Yashasvi Jaiswal, who scored the most runs with the bat, also did wonders in the bowling, dismissing Eamon and returning India to the match again. Eamon hit seven fours off 79 balls.
After Eamon’s dismissal, all hope of Bangladesh rested on Captain Ali. After this the match came to rain and the game had to be stopped for some time. But when the game resumed, Bangladesh gave a revised target of seven runs off 30 balls and which they achieved with 23 balls remaining. Ali teamed up with Rakibul Hasan (nine not out) to give his team a three-wicket victory and make him the champion for the first time. Ali hit four fours and a six off 77 balls. For India, Ravi Bishnoi took the maximum four wickets for 30 runs in 10 overs. Apart from him, Sushant Mishra took two and Jaiswal took one wicket.